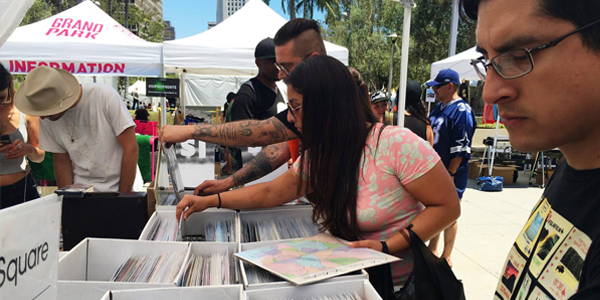 The final event of 4 Days of Hip-Hop Dance at Grand Park and the Music Center is the Beat Swap Meet on Sunday June 19th. Coming on the heels of the Ain’t No Half Steppin’  panel, Sleepless at The Music Center’s Walt Disney Concert Hall and Compagnie Käfig at The Music Center’s Dorothy Chandler Pavilion, a palpable spirit hangs in the air on Grand Avenue in the Cultural Corridor.

The Beat Swap Meet for those that do not know is a travelling record swap meet that started back over 8 years ago. The Grand Park edition is the 8th anniversary and it promises to be an exciting afternoon of several dozen vendors selling vinyl records, apparel and lots of miscellaneous music related merchandise. Several local independent record labels are on hand selling their wares and also lots of vinyl collectors are there selling rare records and hard to find collectibles. As much as the event is associated with Hip-Hop, there are thousands of records from every genre including Blues, Funk, Jazz, Reggae, Rock, Punk, Soul, Metal, Dancehall, Hip-Hop and the undefinable all will on be on hand.

Jeremy Sole with Mike the Poet

Prominent local DJ’s like KCRW’s Jeremy Sole will be there selling gems from his own personal collection. Zulu Nation member and venerable Los Angeles Hip-Hop artist L. Scatter will also be in the mix selling records and sharing conversation. DJ Abel, known for his great DJing skills and time at Stacks Records in Cerritos will also be in attendance fixing turntables for any DJ’s that need help with that. Among the many local record labels on hand with their own table, one of them is MoFunk and its co-founder XL Middleton. 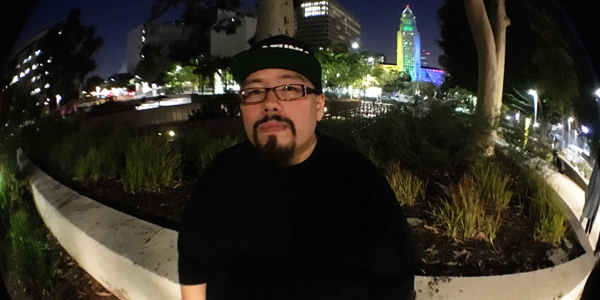 XL Middleton is a Pasadena-born musician and one of the key figures in the Modern Funk Movement. Earlier this week, he shared with me his enthusiasm for Beat Swap Meet, Los Angeles and funk records. “I started MoFunk Records with Eddy Funkster,” XL exclaims, “one of the deepest collectors of 80’s funk records that I’ve ever met, who is also one of the resident DJ’s at Dam Funk’s Funkmosphere night here in LA. We were already aware of what a worldwide phenomenon that modern funk music was becoming, and we found it ironic that there was so little of it coming from the city that had really adopted it as its signature sound, decades prior. So we wanted to start this label to give people our unique take on the funk. It’s based on things, both positive and negative, that we saw growing up in LA in the 90’s – backyard parties, low riding, popping and locking, breaking, gangbanging, all the things that, for better or worse, were an integral part of the landscape, so to speak. The music is an amalgamation of synth-heavy 80’s R&B, electro hip hop, and 90’s g-funk.”

XL has a lot of enthusiasm about the Modern Funk Movement. He explains that there is a burgeoning scene of many artists and LA is one of the epicenters. “I can’t name them all because there’s just so many,” he confesses, “but I’ll give you a few. Zackey Force Funk, in many ways we think of him as a part of MoFunk too. He was the vocalist on “Press Play,” which me and Eddy Funkster produced, and is now considered one of the essential tunes in the modern funk canon. There’s Brian Ellis, another amazingly talented multi-instrumentalist and recording artist. Psychic Mirrors from out of Miami, they’re another favorite of mine. Their tune “Charlene” is probably still my favorite modern funk song ever.”

On the MoFunk label he has several artists. “First there’s Moniquea,” he says. “She was the first artist we released on MoFunk, with the 7″ single “I Don’t Wanna Get Used To It,” as well as our first full length LP release, “Yes No Maybe.” She’s got a really unique voice and she grew up listening to tons of 80’s funk and new wave,” he explains. He has also recently signed an artist from the Bay Area, Diamond Ortiz, a multi-instrumentalist and composer/producer. They have already released a 7″ from him and an EP, “The Boomerang EP.” Ortiz just finished his first full length, “Loveline,” and it’s coming out before the end of the year. Beyond that, MoFunk also just put out a 12″ from a group called Shiro Schwarz out of Mexico City. They are planning to do much more with them in the future. XL tells me there is much to be excited about with MoFunk and the Modern Funk Movement.

XL Middleton loves Los Angeles, the Modern Funk Movement and Beat Swap Meet. He’s been participating in several ways with the Beat Swap Meet over the last 3 years. In 2013 Moniquea and he performed when Beat Swap Meet was in Chinatown. “I remember thinking how amazing it was, in every sense, but especially on a cultural level.” 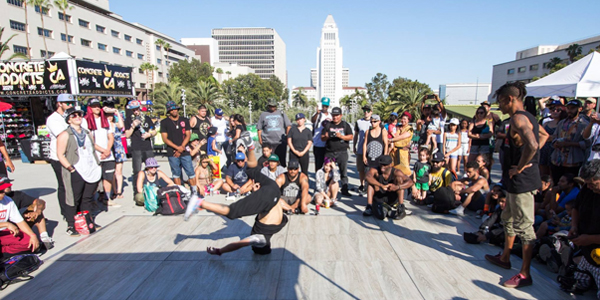 He sees the event as a microcosm of the city itself. XL concludes our discussion by saying, “Beat Swap Meet is a cultural cross-section of everything in the city that falls outside of what LA is stereotyped to be. It’s so much more than just a place to buy used records. It’s where people can come together and feel free. That sounds so cliché, but what I mean is – There’s no dress code, you don’t have to pay $30 to get in, it’s not a place that’s overrun by aspiring stars and Instagram models. It’s everything that LA truly is, that is sometimes hard to put into words. But, if you come out and experience it for yourself, I think you’ll understand.”

Considering Grand Park is in the center of the city and the place for everyone, there is no better place for Beat Swap Meet to be on Father’s Day than the iconic rectangular three-block park connecting City Hall and the Music Center.