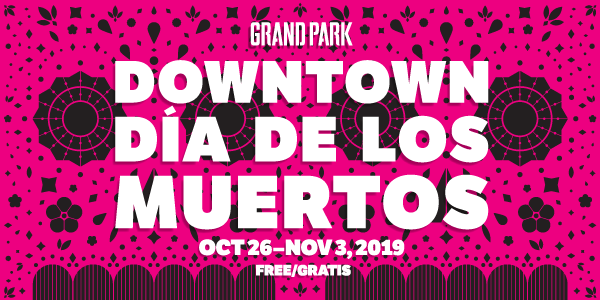 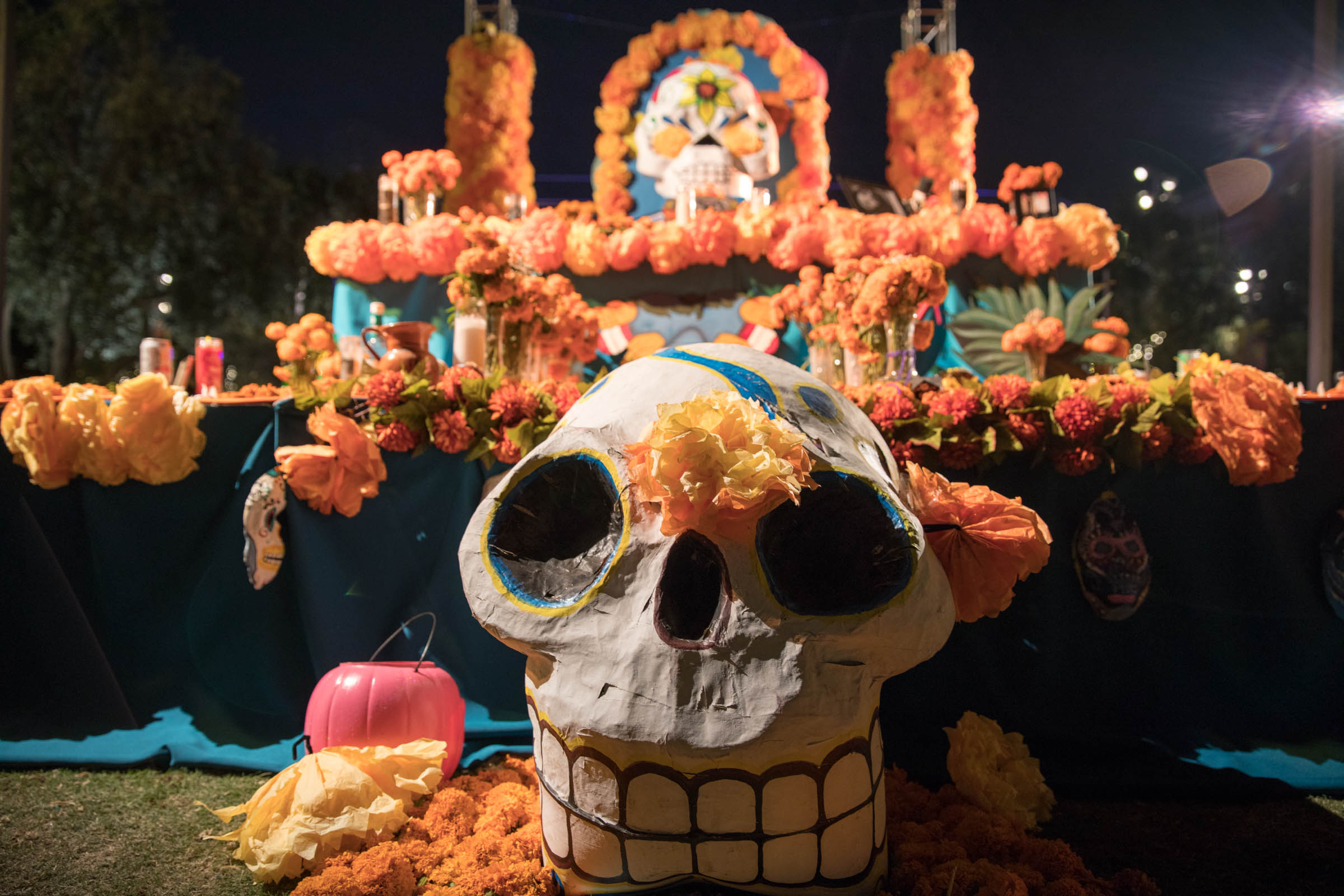 Grand Park’s Día de los Muertos Altars + Art Installations
Locations: Grand Park (North Broadway) to The Music Center Plaza
Guests can experience, discuss and learn about the traditions of Día de los Muertos and stroll through 40+ altars, curated by Self Help Graphics located throughout Grand Park as well as the newly renovated Music Center Plaza. All personally and culturally relevant to Los Angeles, one of the altars by ARza Ozo Community will honor former Dodgers players and family members who grew up avid fans since the team’s arrival from Brooklyn in 1958. Additionally, Grand Park will display large Día-themed sculptures produced by LORE Media and Arts and made by professional artists, craftspeople and community organizations in the park’s Fountain Overlook area and in the popular splash pad.

At the Music Center Plaza, view colorful swags of papel picado designed by artist Maricela Sosa as they adorn the Grand Avenue stairs and welcome visitors to the Plaza. Additionally, The Music Center invites the community to contribute to the Plaza altar as part of the reflective remembrance to honor those who have passed. The altar was created by Martha Carrillo, an LA-based visual and theatrical artist with expertise in prop-making, set decoration, and extensive experience in printmaking and large-scale papier-mâché objects. Martha is part of the Self Help Graphics & Art Barrio Mobile Art Studio team of teaching artists. and has worked with The Music Center, Center Theatre Group, Freewaves and others.

The newly-renovated Plaza fountain will be lit in orange and yellow for the week as a nod to marigold flowers, ubiquitous on altars and throughout Dia de los Muertos celebrations.

On select dates, drop in at the Music Center for screenings of films on the Plaza screens. Note: Films will be played on loop beginning at each published start time.

Go Get Em Tiger on the Music Center Plaza will offer a specialty drink to celebrate the season: Día de los Muertos Cappuccino.

Noche de Ofrenda
7:00 p.m.–9:00 p.m.
Location: Grand Park Performance Lawn (Near Hill Street)
For the seventh year in a row, Grand Park partners with Self Help Graphics to present a traditional Noche de Ofrenda ceremony honoring the dead and featuring a communal circle and blessing led by the indigenous community. The joint event of reflection and remembrance will unveil a master altar ideated by artist and educator Ofelia Esparza, a 2018 NEA National Heritage Fellow; both she and her family continue to be instrumental in preserving and conserving Día de los Muertos in Los Angeles. Throughout the evening, and the entire nine days, park-goers are invited to contribute to this community altar as part of the reflective remembrance. The ceremony will also include dancers representing Aztecan, Oaxacan and Michoacán traditions as well as performances by Los Angeles-based poets and musicians, including Latin music artist CAVA from East Los Angeles.

SUN OCT 27
1:00-6:00pm
Film at the Music Center Plaza:
Macario | 1960, 91 minutes, Spanish with English subtitles | Directed by Roberto Gavaldón
Poor, hungry peasant Macario longs for just one good meal on Dia de los Muertos. After his wife cooks a turkey for him, he must face three apparitions: the Devil, God, and Death.

12:00 noon – 3:00pm
Drop-In Activity: Join the Music Center and Self Help Graphics on Friday, November 1 from 12-3:00pm to contribute objects to the altar and to learn about the traditions, aesthetics, and symbolism of Dia de los Muertos. Note: Reproductions of photographs and offerings are welcome, but please do not place precious objects, food, or open flames.

Selena for Sanctuary
7:00 p.m.–10:00 p.m.
Location: Grand Park Performance Lawn (Near Hill Street)
Selena for Sanctuary is a free concert featuring an all-female line-up of L.A.-based Latinx artists designed to bring immigrants and allies together in a social justice movement. Performers include Empress Of, San Cha, Ceci Bastida, Maya Murillo, August Eve, and Loyal Lobos, plus the house band for the evening, Selenamos and DJ Zuri Adia (of Technocumbia). Organized by the L.A.-based, non-profit Solidarity for Sanctuary and hosted previously in Central Park and at Lincoln Center, Grand Park’s Selena for Sanctuary concert is a homecoming for the organization’s mission to raise awareness about issues concerning immigrant communities and offer resources to help them through the immigration process. Anahuacalmecac Danza Azteca Círculo, a student-led group from Los Angeles-based Anahuacalmecac International University of North America, will perform, honoring ancestors, during the opening ceremony for Selena for Sanctuary and Los Angeles-based Salvadoran poet Yesika Salgado will host the concert. Additionally, volunteers from numerous immigrant advocacy groups will participate: Las Fotos Project, an organization that inspires teenage girls of color through photography, will host a photo booth for event goers; while Kids of Immigrants, an L.A. street wear label utilizing fashion to express their roots and environment, and Central American Resource Center (CARECEN), a Central American immigrant rights organization, will host information booths during this concert.

Grand Avenue Arts All Access
11:00 a.m.–4:00 p.m.
Location: Grand Park Olive Court and Performance Lawn
The Music Center Plaza As part of its participation in the 5th Annual Grand Avenue Arts All Access, Grand Park, as well as The Music Center, will host free-art-making workshops open to adults and children using Día de los Muertos themes as inspiration. These family-friendly craft sessions invite event goers to use art as conversation in discovering a shared humanity and connection, while learning about this culturally important tradition. These activities will take place in Grand Park’s Olive Court and Performance Lawn, and also on The Music Center Plaza.

1:00-5:00pm
Film at the Music Center Plaza:
Coco | 2017, 125 minutes, English | Directed by Lee Unkrich
Aspiring young musician Miguel is accidentally transported to the Land of the Dead, where he seeks the help of his deceased great-great-grandfather to return him to his home and family among the living.