Grand Park has a new landmark on the way… 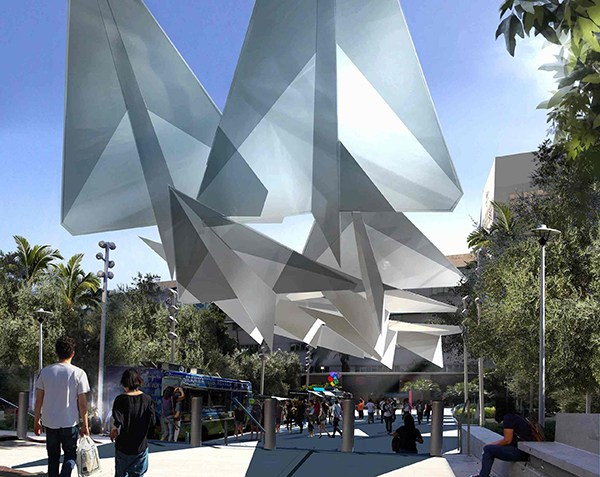 The results are in! L.A. has chosen the design to make A COOLER GRAND PARK. Soon, Paper Airplane will soar over Olive Court. Artists Elenita Torres and Dean Sherriff have created a whimsical vision, inspired by both Grand Park and the Downtown landmarks that surround it. This project has been made possible by the Goldhirsh Foundation’s MyLA2050 Grants Challenge, which sought creative and innovative solutions to shape a better Los Angeles. The grant received by The Music Center will make it possible for Grand Park visitors to enhance their enjoyment and comfort by gaining much-needed UV protection, while increasing the park’s potential as the site for performances, exhibitions and festivals. Paper Airplane will be featured in the park for two years. 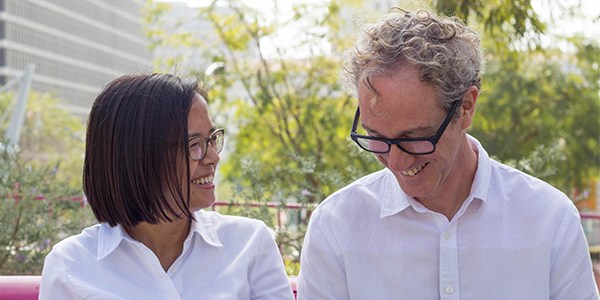 When Elenita and Dean first moved to Los Angeles five years ago, their love of their new city was immediately galvanized when they first discovered Grand Park. “I ended up coming here by accident,” said Torres who was instantly enamored, ”What is this place?!” When they heard about this design challenge they knew they had to throw their hats into the ring. 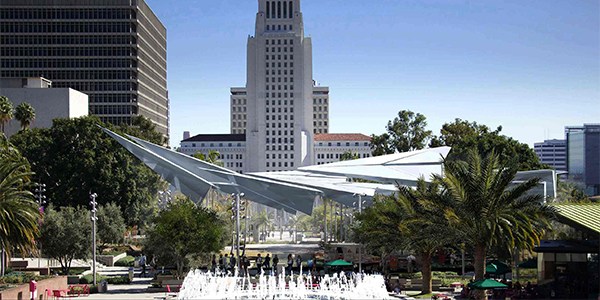 “I think it goes well with the architecture in the area, with Frank Gehry’s building, and it’s even a nod to the art deco architecture (of City Hall). It looks like it all belongs together,” said Dean. They have sought to synthesize DTLA’s classic past with its bright future while still complimenting the essence of Grand Park. “With the beauty of the park when everything is blooming, and all the different colors, we didn’t want to take away,” Elenita added.

Torres and Sherriff explain their design reflects the hopeful nature of Grand Park with a universal concept – the paper airplane – that appeals to all ages and is understandable no matter what language one speaks.  Like the park’s emphasis on providing free, accessible programming, the artists describe the paper airplane as free to create.
The artists chose white as the main color for the planes to provide a neutral palette that would complement the surrounding garden landscape, add an element of elegance and symbolize peace.

Of course, the function of this new structure is to provide some much-needed shade, but it also will also serve as a place for the Angelenos to gather. “It’s such a vibrant county, there’s so much movement going on, you need a park like this in the center of it to give people a sanctuary,” said Sherriff. 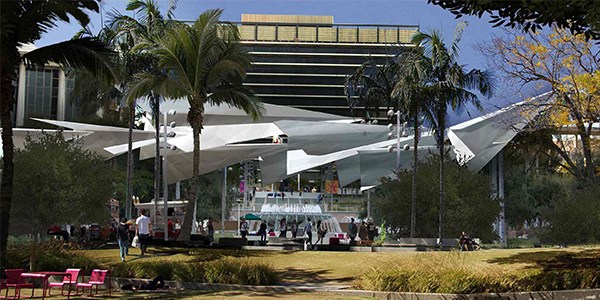 With summer on the horizon, work on this project is about to get underway. And what better way to usher it in than by catching a bit of cool shade on a beautiful day in the heart of DTLA.

Thanks to Goldhirsh Foundation, the community of talented artists who submitted their beautiful designs, and all of Los Angeles for helping build a cooler future for Grand Park.

Read up to prep for this year’s bigger, better celebration which includes Grand Park and The Music Center. Grand Park + The Music Center’s N.Y.E.L.A. is the flagship West Coast New Year’s Eve celebration and is THE place to ring in the New Year alongside not just all of Los Angeles, but also with the world’s capitols.

Mitchell Colley asks “WHAT’S THE BIG DEAL ABOUT N.Y.E.L.A.?” Here’s the skinny-minny on the brains behind the operation, why no fireworks, the purpose of public countdowns and the down-low of what makes us tick as the clock strikes midnight. 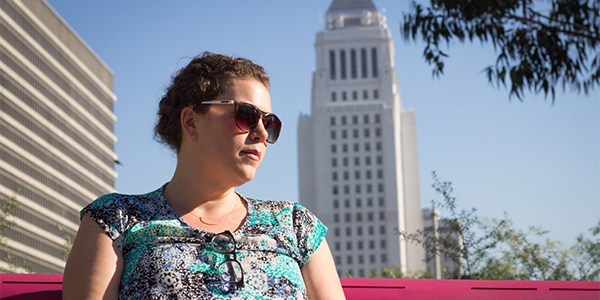 MC:  How do you begin to wrap your head around countdown celebrations? What do you see their purpose as?

JD: New beginnings are so exciting. They mean limitless possibility. When we mark the transition from old to new in a festive and communal way instead of alone, it means not only are our new beginnings about intimate personal things, they are about bigger picture parts of our lives. When we celebrate together, we can feel excited about the possibility of what we will achieve and experience together whether that is about a couple, a family, a team, a neighborhood, or a county.

MC: New York has this long-standing event involving a ball dropping and swaths of people gathering in Times Square. How did you begin to distinguish the characteristics of a Los Angeles ‘style’ of countdown?

JD: L.A.’s countdown reflects its role as the creative epicenter of our world. LA has always been home not only to creative artists but to artists who are harnessing technology to push new mediums forward. We have done this particularly in filmmaking and animation. N.Y.E.L.A.,  with its use of 2D and 3D mapping technology sits at the forefront of what art and technology can create. I like to say that it is a true 21st century countdown. The ball is analog.

MC: How did the idea of video mapping City Hall come to the forefront of your mind?

JD: A video mapping artist approached me in early 2013 and told me that City Hall was a dream for anyone in his world. He planted the seed of interest and the realization that Grand Park was well suited for mapping projects. When we started planning last year’s N.Y.E.L.A., our collaborators were also excited about the possibility. It has just felt like a natural fit from day one.

MC: So I have to ask, why not fireworks?

1. We do fireworks at 4th of July so we like to switch it up.

2. Fireworks are not story-telling mediums. They pretty much just go boom. It doesn’t leave a lot of room to talk about L.A. and to customize the show every year.

MC: The event has grown significantly from the first year. What can patrons expect to find that is new? What has the Grand Park team improved upon?

JD: We did a lot of listening and we appreciate that L.A. gave us feedback after the event last year. We have worked hard to improve the infrastructure of the event, those things that really impact the audience experience. So that means:

– More room in the streets for people to stand

– The projection on City Hall will be on two sides of the building. It will also enable more people to have a great view.

MC: What / Who should I bring with me?

I would also bring a camera, a jacket, a comfy pair of shoes, a snack, and a smile. Please check the website to be sure about what you can’t bring in so you don’t have any frustrations day of.

MC: Any resolutions on behalf of yourself or Los Angeles you’d care to share?

JD: For me: To keep exploring. As Programming Director of Grand Park, my job is to keep learning about L.A. County and bringing what I find to the audiences that come to Grand Park.

For L.A.: Not to forget that the drought is very real even in winter when we are getting rain. We have to resolve to remain vigilant, adaptive, and resourceful. 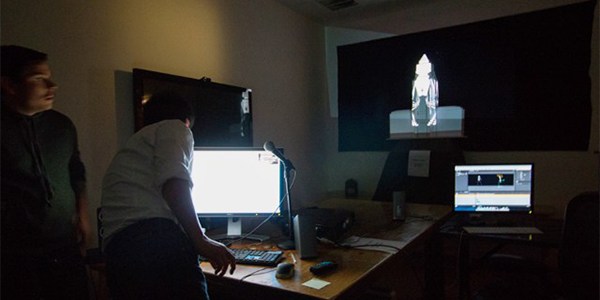 MC: Tell us a little bit about your work, expertise, and a bit about yU+co

GY: I am a film title designer with a fine art and graphic design background. I have always been interested in time-based story telling. I design short sequences for the beginning of a film, setting up the tone and mood for the audience to enter the film maker’s world. I also design motion graphics for television show opens, commercials, and new media.

Recently, I have started shifting my focus into multi- media public art projects. A year and a half ago, I created my first large-scale multimedia public art installation at Pier 57 in New York City, called The Interactive New York (T.I.N.Y. Show). The installation was a collaboration with Madrid-based architect Jose Maria de Churtichaga and incorporated projection mapping and interactive sound.

yU+co was founded in 1998. We have evolved from being a title design company into a multi-disciplinary design agency. We have a division called yU+co(lab) that focuses on experiential design and multimedia interactive projects. We have expanded from one office in LA to include 6 offices in China.

MC: How was the experience of working with Los Angeles’ City Hall as a canvas? How has the architecture informed the work?

GY: City Hall is a very unique building. It’s a long vertical tower. There are 18 stories with windows centered vertically between 2 pillars plus another 4-story high triangular tower on the top.  The architecture informed me to design the flow of imagery entering from the bottom to the top. I took advantage of applying my images to the canvas vertically. However, in some cases I break the rhythm, entering horizontally.

MC: What was the process like? (Give us a taste)

GY: It’s been a very creative collaboration with Julia and the Grand Park team. The biggest challenge at the beginning was to come up with the theme and concept. Based on Julia’s direction on what Grand Park wants to communicate to Angelenos, we developed the concept of “The Beat of The City”. Once awarded the project, we free-floated ideas, and we tested each other’s brain waves. I thought, “Should we do what everyone expects — 3D visual tricks and illusions, cool motion graphics? Or should we try something unexpected and give Angelenos an experience?” Julia was pretty keen on the narrative and I knew people would want to see 3D effects. I also wanted to bring an interactive component to the projection mapping medium. The result is a show that gives it all to the people in the park on that evening.

MC: Has your perception of public countdowns changed since taking on the N.Y.E.L.A. project?

GY: I don’t know yet. I look forward to experiencing it on NYE I hope this short-form narrative will touch people at the park when they are watching it. It is a moment that we will all share together, a feeling about our unique city and life. I hope to bring people together emotionally. Taking on the Grand Park + The Music Center project definitely changes my perception of how public countdowns can be different. This will mark a new milestone in public countdowns. I am proud to be part of it.