“There doesn’t need to be 500 of us in a picket line on the steps of City Hall. We are out here, taking in the sun, our children are here, our families. This is history right here.”

I arrived at the park on my bicycle, in the early afternoon, to celebrate this simple and undoubtedly profound moment in Los Angeles. 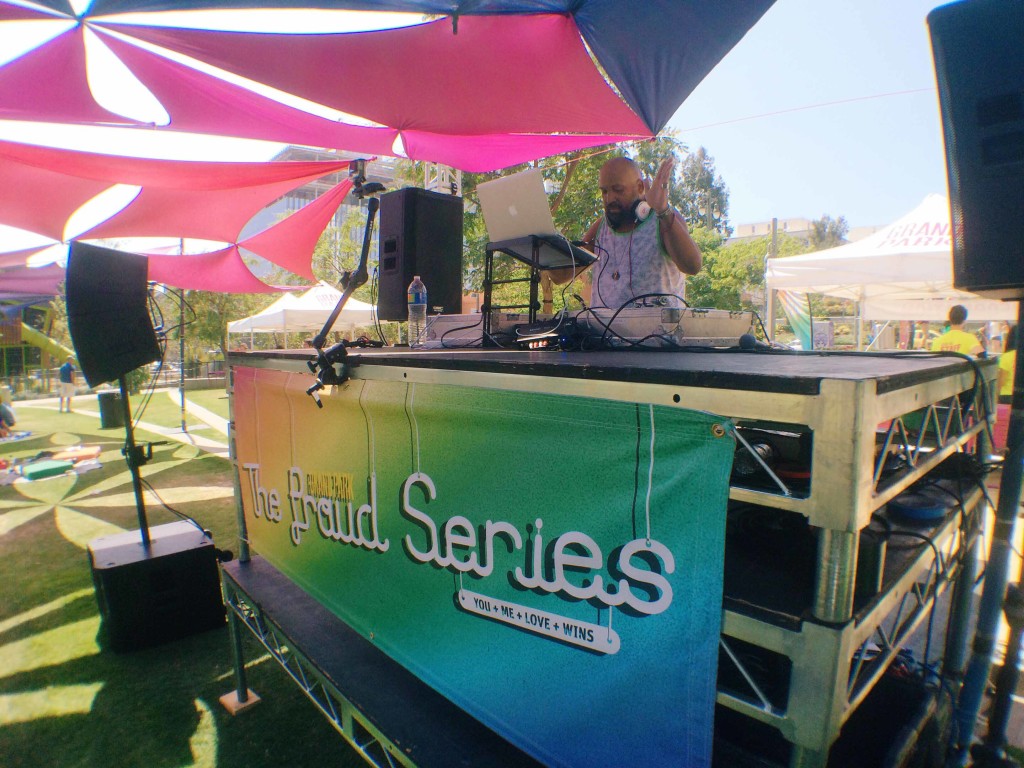 I was embraced by the energies of those I knew and some that I was about to meet. As I walked on to Grand Park’s event lawn, I noticed that Azul 213 was looking out from behind the decks at the groups that had began to gather, finding refuge as patrons claimed spots in the shade. The music beamed into the summer sun. The sense of community was astounding. We had arrived. 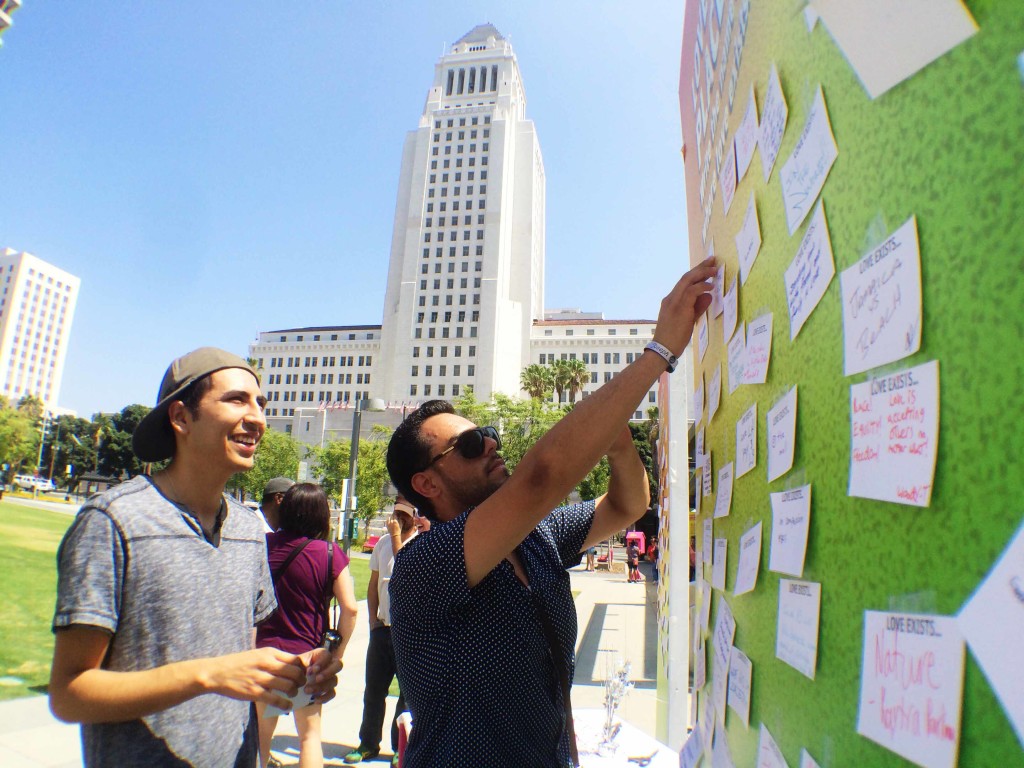 One of the things you notice about the Civic Center of Los Angeles, when you spend enough time, is that it carries a weight. It is a place of civil dissension, a place where you go to get divorced, a place to be declared innocent or guilty, a place to dream up public policy, a place where legislation gets enacted and becomes history; it is a place in constant flux.

On October 6th 2012, Grand Park opened to the public and quickly became the beating heart of the Civic Center, a place where every Angeleno in the county could take refuge. The gem of Los Angeles County, it is the park for everyone. 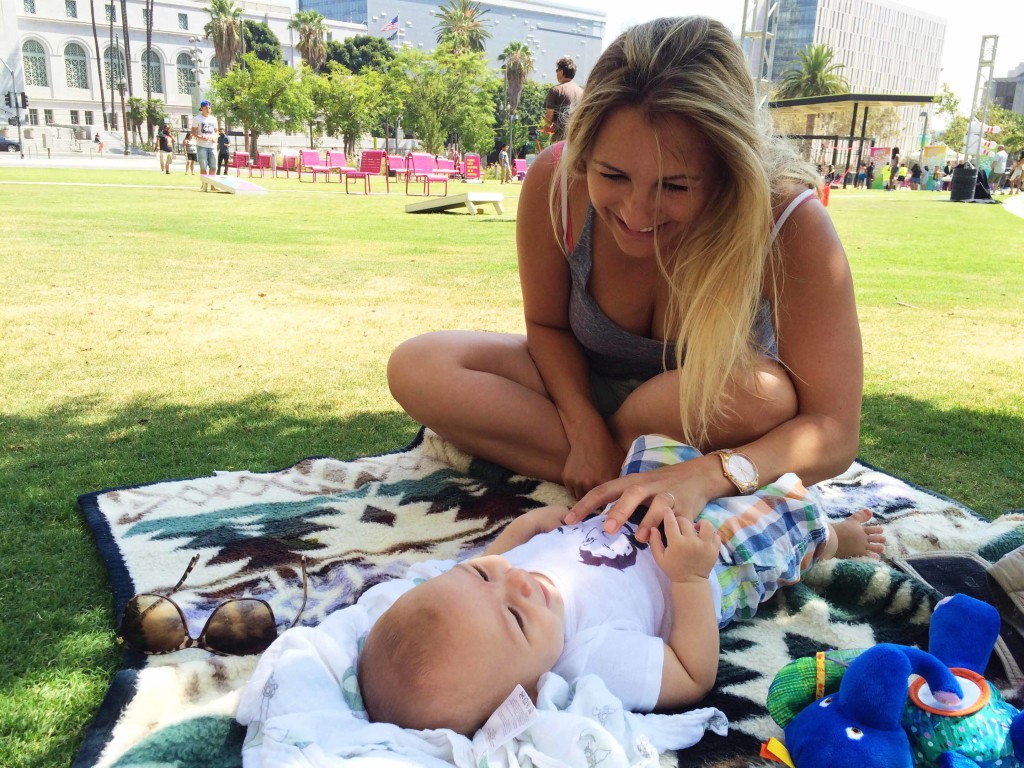 Grand Park is a place to relax, to connect with others, to bring the whole family, to exercise, to walk the dog, and, unsurprisingly, to get married. Despite the shadows of the surrounding buildings that make up the Civic Center, Grand Park has quickly grown to be a place that everyone can utilize, enjoy, and be proud of.

Once I had my footing at the picnic, I raced over to check out the pop-up installations. Volunteers from Jovenes Inc. were there to greet me and asked if I wouldn’t mind writing some small moments of where I thought love exists. I placed notes on walls dedicated to love existing in the past, in places, and in people.

As I read the other notes, I got this supreme sense of togetherness within a community of strangers; each note a window, each window a world.

On June 26, 2015 the United States Supreme Court ruled that state-level bans on same-sex marriage are unconstitutional, almost exactly two years after Proposition 8 was ruled unconstitutional in the State of California. 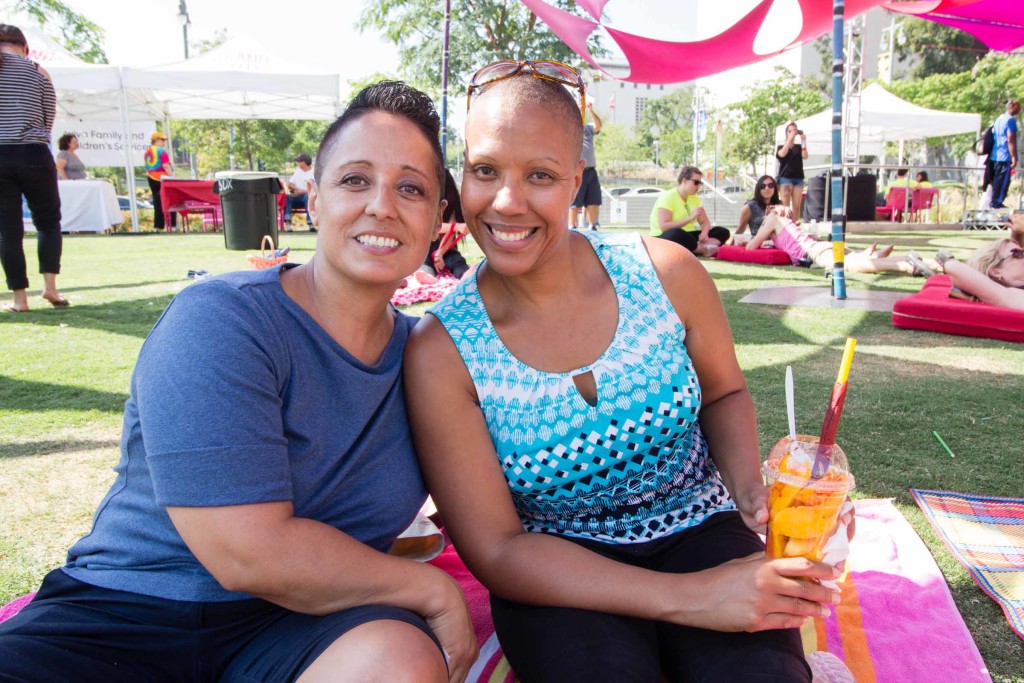 The LGBTQ community is no stranger to obstacles and has undeniably overcome many, same-sex marriage being one. The community has many factions, many individuals, many voices, and many priorities. These do not all consistently gel in perfect harmony. The need to overcome obstacles can provide a common ground in the search for equality. It is in itself an equalizer. 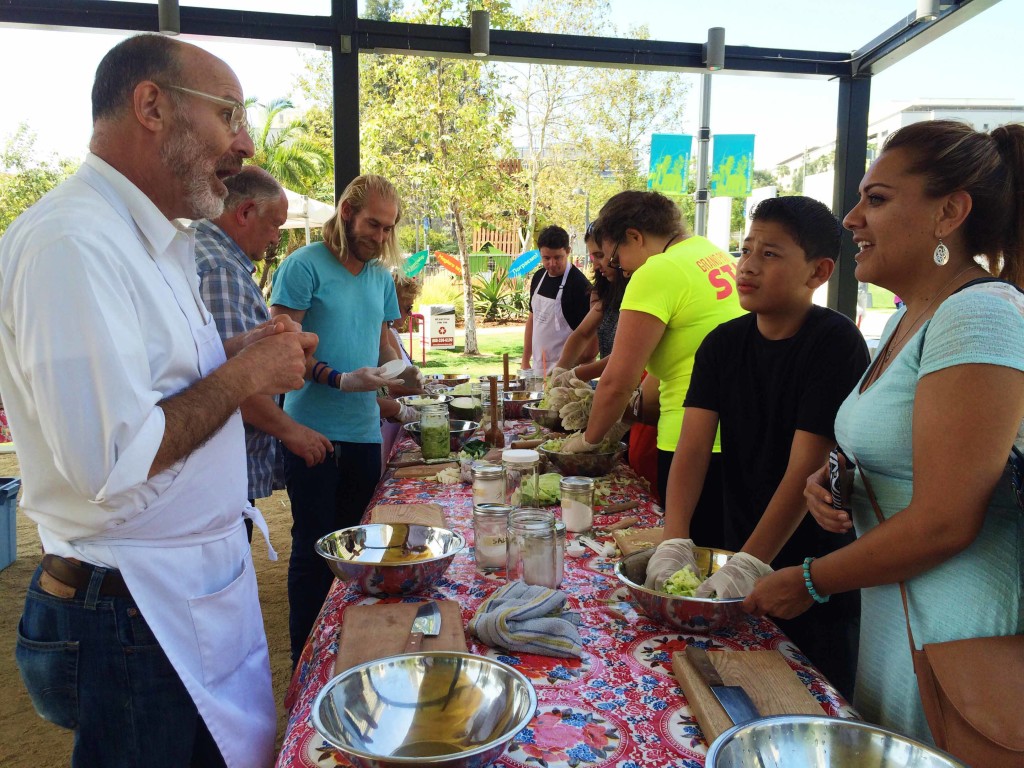 As I came upon Joseph Shuldiner, the Director of The Institute of Domestic Technology, as he was leading sauerkraut-making workshops, I had a thought that food is also an equalizer. We all deserve to eat, just as we deserve to be treated fairly and provided basic rights. We all deserve to take our seat at the table; or, in this case, at the picnic blanket. 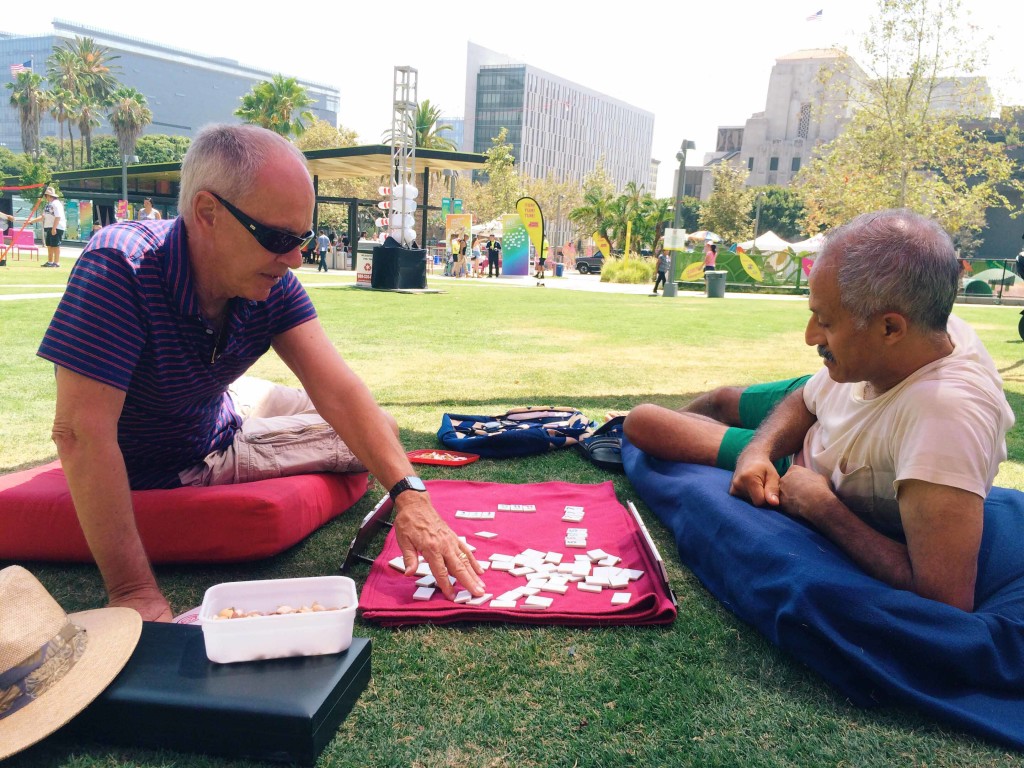 Game on. | Photo by Javier Guillen.

I spent the afternoon playing badminton, watching the board games as they expired the time, reconnecting with some of my best friends, and taking small moments to meet new ones.

Late in the afternoon, I came upon Javier Guillen, Grand Park’s Social Media Manager, engaged in a conversation with a woman. It was her first time at the park. She had come to witness this day in history. A day in which one community, with all its unique faces and identities, could be together; one community with no political agenda, with no immediate discrimination near, celebrating being together for real. 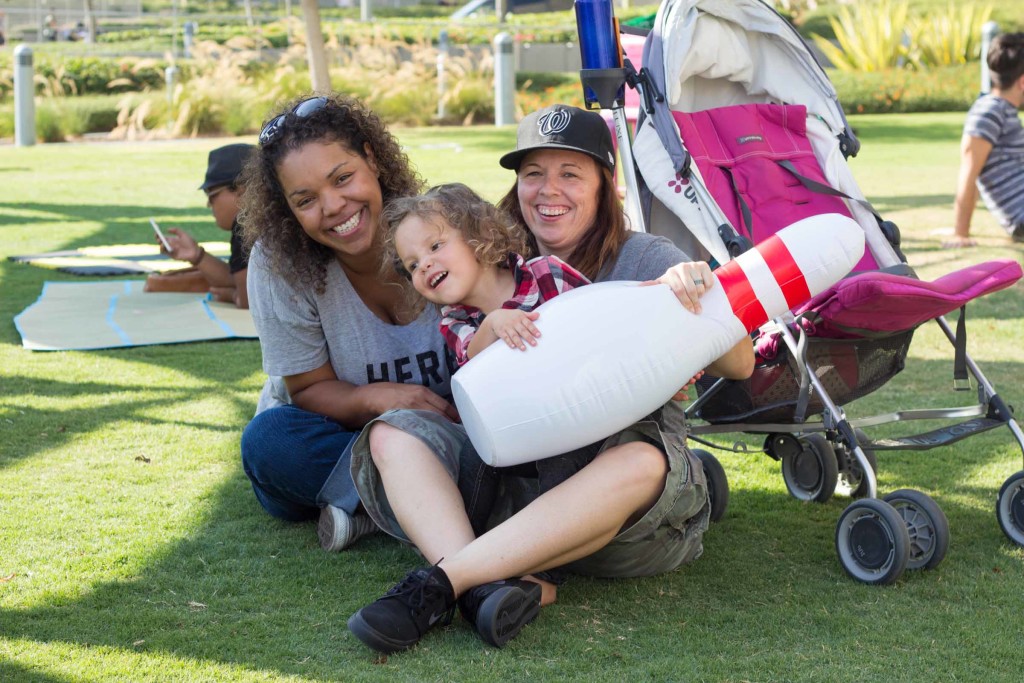 All smiles. | Photo by Javier Guillen.

“There doesn’t need to be 500 of us in a picket line on the steps of City Hall. We are out here, taking in the sun, our children are here, our families. This is history right here, right now. I came out here to see it and I’m glad that I met you. I’m glad that we had this conversation today.”

On October 3rd, 2015, Grand Park will hold its second event in the PROUD Series, PROUD Stories. I plan to be there with my loved ones, waiting to have another conversation.