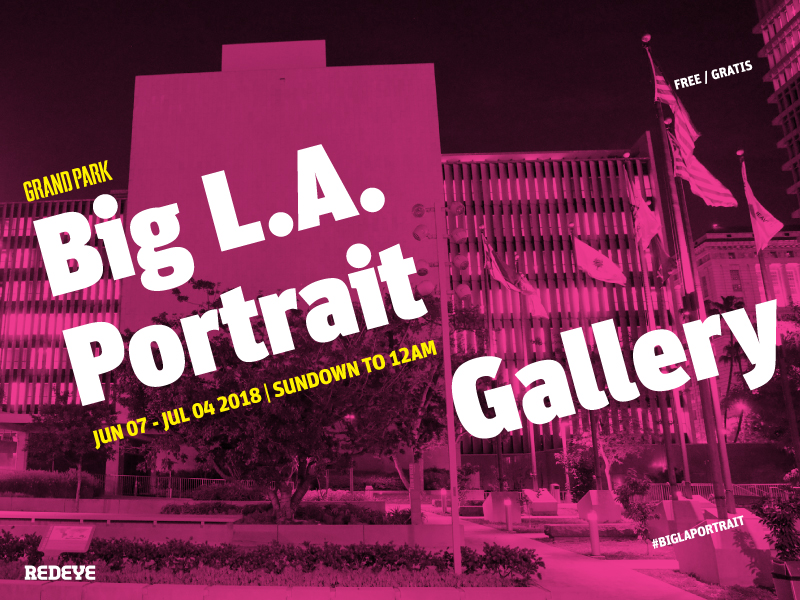 For the second year, Grand Park transforms into a nighttime art gallery featuring photography by L.A.-based artists projected to 100 feet wide by 100 feet high on the south wall of the historic L.A. County Hall of Records. Built by famed architect Richard Neutra, one of his few high-rises, this iconic modernist building serves as the perfect canvas for larger-than-life artwork. Featured images will tell stories and share visions of L.A.’s future as envisioned by some of the county’s best photographers. Park-goers can enjoy the exhibit over a picnic, view the gallery during their nighttime commute or take in the images during a stroll through the park.

Aly Aliano
Real Mother
Real Mother is a personal project I began when my twins, Hallie and Ellison, were 9 years old. I married their father when they were five. I was instantly a parent at age 26. I did everything I thought a parent did: dentist appointments, parent-teacher conferences, playdates, sleep-overs, etc.  People would ask, “Aren’t you going to have children?” Implying that as a stepmom, I was not a “real mother.”

I began photographing any mother who would allow me into their world and share their story.  With Real Mother I attempt to raise questions such as, “What makes a mother? I seek to understand my own experience as a mom and my own legal emancipation from my mother at 19.  I hope that all mothers will have the support of their employer, family, healthcare, accessible education for every child, and paid family leave. My intention is that this project raises awareness and understanding around the many forms a “Real Mother” can take.

Emily Shur
Nature Calls
Emily Shur started Nature Calls in 2009 when she first noticed strange looking trees here and there. Little by little, these poor excuses for foliage were slowly infiltrating her day-to-day scenery, until she ultimately found out they were disguised cell phone towers.

Emily set out to create a document of these objects within the genre of classic landscape photography. Her intention was to photograph through the eyes of an explorer. She imagined Edward Curtis roaming the American West armed with nothing but a camera and a tripod. So, that is what she did…except she roamed in a Prius. During the documentation process, it became clear that she was also documenting technology, and how it changes our lives and now has begun to change our landscapes.

Gizelle Hernandez
Underrepresented Glamour
The following subjects are all people of color who work in LA’s creative industry.

As a fellow person of color, I find it important to highlight, connect and collaborate with other like-minded creatives.

Their concern for inclusion and culture have drawn me to them and their individuality and vibrancy are at the root of these photographs. Each artist has a strong sense of who they are and where they come from, and I was inspired to create environmental portraits based on their bold sense of self and style.

Gregg Segal
Daily Bread
When I was growing up, 1 in 40 kids were obese. Today, it’s 10 in 40. For the first time in many generations, life expectancy is declining. Unfortunately, we have outsourced making our own food, this essential part of our lives, the connective tissue of families and culture. There’s an old adage: “The hand that stirs the pot rules the world.”Well, the hand stirring the pot is more interested in profit than in our health. It’s time we take back food by stirring our own pots and demanding healthier options.

In shooting Daily Bread, I ask kids to journal everything they ate for week and at the end of the week, I shot a portrait of them with their food arranged around them. I started shooting in my backyard in Altadena and expanded to include kids from other LA neighborhoods, and the whole world.

One of the most defining aspects of movements like March for Our Lives is the unbreakable passion and resolve today’s youth have in facilitating change that will build a better future for us all. In his series, The Young Visionaries of Los Angeles, Peters photographs 4 young leaders in the Los Angeles area that are working hard to administer a brighter tomorrow.

Matthew Scott
The Concrete River
The concrete River, a.k.a. The Los Angeles River, follows roughly 48 miles, weaving through the urban sprawl and diverse neighborhoods of LA.

The images featured are from a stretch known as the Glendale Narrows, located in Northeast LA. It runs through Atwater Village, the edge of Elysian Park and Glendale. Like most sections of the river, it allows you to escape the city without leaving your neighborhood;  simply hop a fence and walk down the concrete embankment.

Melodie McDaniel
Daring to Claim the Sky
Compton Jr. Posse is an organization that was created to provide a year-round after school program for inner-city youth using equestrian activities to inspire young people to reach personal, academic and career goals. This was a powerful alternative to the equally powerful lure of gang and drug lifestyles. Under the leadership of founder Mayisha Akbar, the Compton Jr. Posse has given inner city kids hope for over 29 years by teaming them with horses. Many of the students go on to earn scholarships to colleges and universities.

Philip Cheung
Predictive Policing in L.A.
The future of surveillance has arrived on our city streets. L.A. has a new observer, the all-seeing, never forgetting eye of the LAPD—who attempt to use the past to predict the future. Backed up by new data technology and an internal culture of organized tracking, the LAPD now uses predictive policing to identify where potential criminal activity might happen, and, troublingly, who might commit these crimes. The LAPD keeps their methods and algorithms close to their collective vests, but in an attempt to record this invisible web of surveillance, photographer Philip Cheung photographed neighborhoods in South LA where predictive policing programs are known to be in effect.

Ryan Schude
Them & Theirs
Them & Theirs is an ongoing portrait project about people and their vehicles. Starting in 2001, I found subjects by placing notes on parked cars I found interesting and wanted to know about the people who drove them. Collaborating with the owners, we would find a location, props, and wardrobe that told a story about the relationship between them and their preferred mode of transportation.

The full exhibit is on display at The California Museum in Sacramento. Photographs by Sam Comen and reporting by Michael Estrin.

Spencer Lowell
Future of LA Technology
Los Angeles perpetually exists in the future. As a city that constantly reinvents itself, it’s fitting that it would be a hotbed of invention. From drilling and refining oil at the turn of the 20th century, to discovering the Big Bang in the 20s at Mt. Wilson, to developing robots to send to Mars at the turn of the 21st century at JPL in Pasadena, LA is more than sunshine and traffic.

Walter Thompson-Hernandez
Blaxicans of L.A.
This series of photos presents people in Los Angeles who identify as “Blaxicans.” As the city of Los Angeles and the United States continue to become increasingly multiracial, multiethnic, and multilingual, this series highlights the experiences of Blaxicans throughout Los Angeles as ways to think about the future.

Music playlist by: SeanO
Sean Osborn has been behind turntables since 2006. He cut his teeth at the Scratch DJ Academy and then honed his skills as the resident DJ at The Whisky A Go-Go.

After spending some time throwing one off parties and doing guest DJ sets at various clubs around the country, Sean soon found himself the co-host and producer of Soundwaves Radio, which airs 2-4am early Saturday mornings on 90.7FM KPFK Los Angeles.

His other radio show, The Treehouse, can be heard every third Monday of the month from 4-6pm (PST) on dublab.com.

He is the co-producer for the monthly soul showcase Devil’s Pie at Lock and Key and can also be seen each and every Friday night at The Shortstop in Echo Park for DOIT as well as Saturday night at The Perch in downtown Los Angeles.